Towards Responsible Research in Business and Management : A Transition Perspective Hao Tan

The Community for Responsible Research in Business and Management (RRBM) has made significant progress and impacts since its establishment. There have been extensive discussions and studies on the urgency, goals, and possible actions in relation to RRBM at both individual business schools and management research community by and large. However, there seems to be a lack of discussions on the “pathways” of a transformation towards RRBM, which may lead to different outcomes depending on the conditions of the transformation and interplays of various actors in the process. Such discussions would help, on the one hand, provide a clearer roadmap for the transformation, and on the other hand, examine various actions that are currently taking place under RRBM in a more systematic manner.

In this regard, a transformation towards RRBM can be informed by “transition research” as a source of inspiration, ideas, and analytic tools. Transition research is focused on the “processes that lead to a fundamental shift in socio-technical systems.”1Markard, J., Raven, R., & Truffer, B. 2012. Sustainability transitions: An emerging field of research and its prospects. Research Policy, 41, 955-967. Two theories developed in the research can be particularly useful for an RRBM-oriented transition, including the multi-level perspective (MLP), and transition management.

The MLP explains a transition process according to the interplay of dynamics at three different levels, including “landscape,”“regime,”and “niche.”2Geels, F. W., & Schot, J. 2007. Typology of sociotechnical transition pathways. Research Policy, 36, 399-417. The landscape in the context of business schools can refer to their exogenous environment involving such elements as the macroeconomy, regulations, and changes in social values and political culture. The regime in relation to the current business and management research relates to the dominant practices in business schools around the world, which is featured with a “publish or perish” culture. The niches are “protected places” where radical innovations can take place. The introduction of RRBM can be regarded as a notable example of niche innovations. 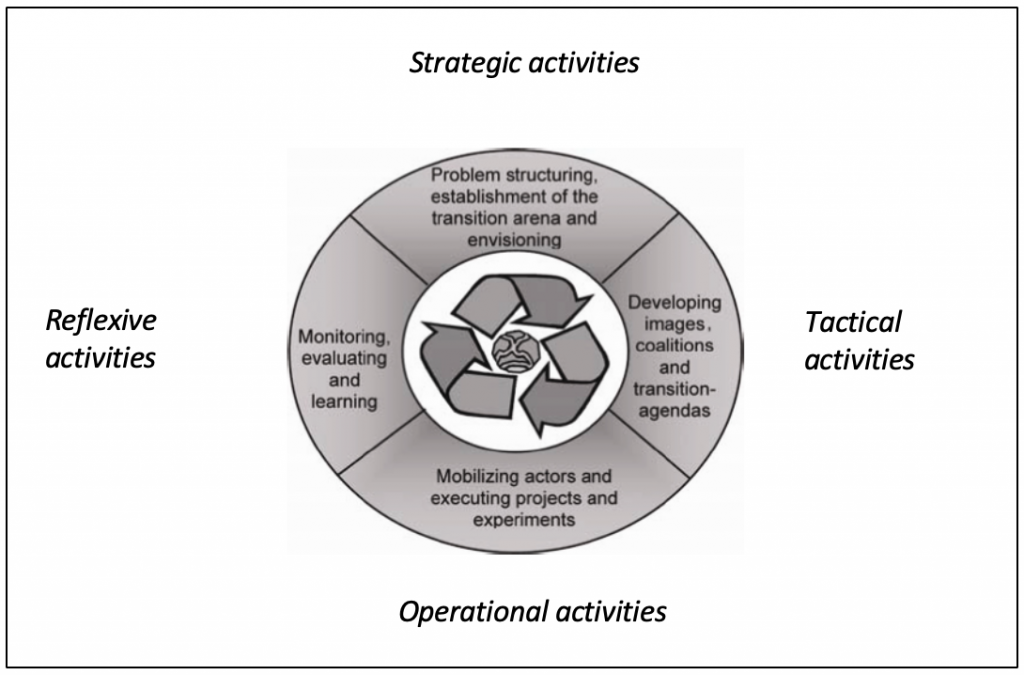 From the MLP, the “landscape” of business schools is indeed changing. In light of criticism from industries, governments, and the public over the lack of value and relevance of academic research, research impacts beyond academia have now been explicitly required in many countries. In terms of the “regime,” management academics, publishers of journals, and accrediting and ranking agencies seems to have developed interests deeply embodied in the current dominant practices in management research, which is a challenge to the transition. On “niche innovations,”many new models and practices have emerged in the production and use of management knowledge, such as self-organized education and learning organizations and communities among entrepreneurs and managers, in particularly through online platforms and channels. Many niche innovations have also been developed within business schools. Those include the increasing number of initiatives adopted by the RRBM pioneering schools and many others.

A smoother transition would be preferable through which current management academics and other key stakeholders of business schools can continue to play important roles in the new regime. However, such a pathway would require proactive efforts jointly made by business schools and their main stakeholders. For the part of business schools, an add-on approach can be considered, through which new practices can be developed or/and selectively adopted on the top of current practices, such as recognition of other types of research by management academics beyond traditional, scholarly publication-orientated research.

Based on the ideas of transition management, active interventions can be implemented in the four forms to steer and facilitate a transition towards RRBM. The Community of RRBM has taken strategic activities, such as developing a vision and establishing a core network as an initial arena of the transition. This core network could further involve those from other institutions to participate in the transition process, such as governments, industries, and opinion leaders from the public. At the tactical level, a broader coalition needs to be developed to overcome the key barriers to a transition of RRBM.  Scenarios and pathways need to be discussed and debated. At the operational level, experiments, projects, and programs with an orientation towards RRBM, need to be developed by individual business schools. Innovative practices in the ‘pioneer schools,’ if successful, should be tested and transferred in other schools, and scaled up. Finally, reflexive activities, such as monitoring, assessment, and learning from experiences and lessons, are essential for continuous adjustments of the direction and process of the transition.

Hao Tan is Associate Professor with Newcastle Business School in The University of Newcastle (UoN), Australia